“The Animal: A Tribute” 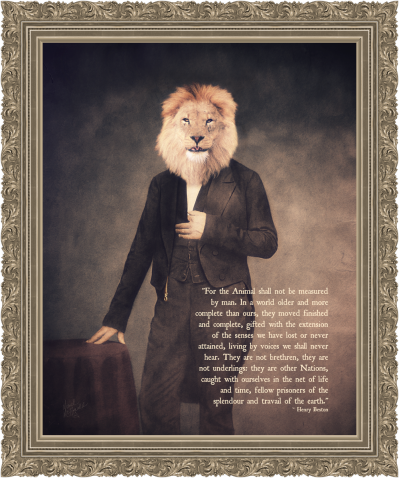 Click on picture to see print in my Etsy store.

I was deeply moved and angered by the recent murder of Cecil the lion this summer by a heartless hunter who paid to have him lured out of a preserve so he could shoot him with a bow and arrow. Cecil fled after being shot and it took the hunting team 40 hrs. to locate his body… Cecil lay suffering for countless hours. Game hunting continues as a major tourist attraction for many countries and a profitable hobby for the wealthy.

This print was done in honor of Cecil and all of the animals who lost their lives and who will lose their lives in order to feed the ego of man. The quote on the print is from Henry Beston and it reads:

“For the animal shall not be measured by man. In a world older and more complete than ours, they move finished and complete, gifted with the extension of the senses we have lost or never attained, living by voices we shall never hear. They are not brethren, they are not underlings: they are other nations, caught with ourselves in the net of life and time, fellow prisoners of the splendour and travail of the earth.”

Hopefully Cecil’s death will not be in vain. Because of his death the issue of game hunting was brought into the forefront. I can only hope and pray the outrage will continue until the beautiful and pure creatures of this world are safe.